Gin Rummy (or simply Gin) is a classic quick fire card game for two players. The aim of the game is to score more points than your opponent. The winner of the game is the player whose score first reaches or exceeds the win target of 100 or 250.

Play Gin Rummy campaigns against the computer player on two level modes, easy or hard. It takes real skill to beat the computer on hard mode with its perfect memory.

You can now customise your play by either playing classic gin, or the Oklahoma Gin variant! Optionally play the 'ace must be gin' or 'spades double bonus' in Oklahoma Gin mode.

You can change your scoring type too between 'simple' and 'traditional'.

Gin Rummy is a simple game to learn, but it will take a while to master!

At the end of each hand, points are scored by the winner of that hand. A players wins either by knocking with gin, or by having the lower deadwood score at the point when someone knocks. Deadwood is the sum of cards not included in a meld in that player’s hand. A meld is three or more cards in a set (cards of the same kind) or run (consecutive cards of the same suit). Face cards are worth 10 points and all other cards are worth their value. 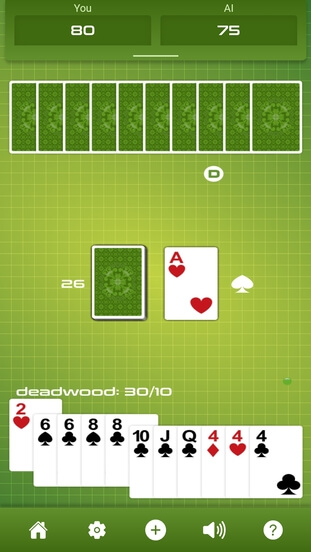 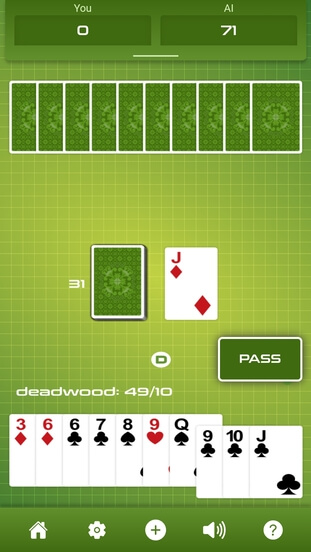 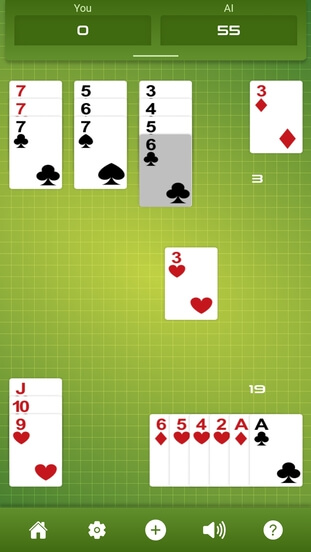 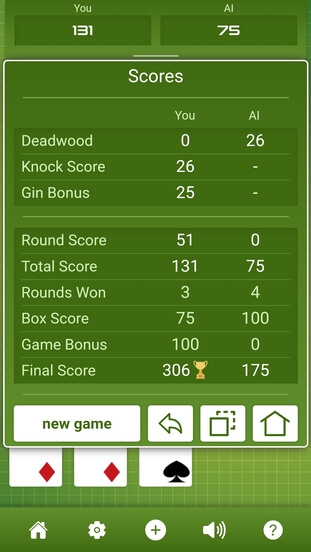 Gin rummy is a two player game using one standard deck of 52 cards.

At the end of each hand, points are scored by the winner of that hand. A players wins either by knocking with gin, or by having the lower deadwood score at the point when someone knocks. Deadwood is the sum of cards not included in a meld in that player’s hand. A meld is three or more cards in a set (cards of the same kind) or run (consecutive cards of the same suit). Face cards are worth 10 points and all other cards are worth their value.

The initial dealer is chosen at random and then alternates for each hand. 10 cards are dealt to each player and the 21st card is placed face up next to the deck.

The non-dealer is the first player to act. They must decide whether to pass (do nothing) or play (swap a card in their hand for the card face up next to the deck). If they pass, the other player must decide whether to pass or play. The card discarded from a player’s hand is placed face up next to the deck. Thereafter, the person to act can take either the card face up next to the deck or the next card face down on the deck into their hand, and then discard a card from their hand (which may be the card they just picked up). The decision to take and discard cards is based upon minimising your deadwood score by maximising the number of cards included in melds. Play continues until a player knocks. If only two cards remain face down on the deck, the hand ends in a draw and neither player scores.

A hand ends when one player knocks. A player knocks on their turn and can, but is not obliged to, do so when their deadwood score is 10 or lower. Knocking occurs after picking up from the deck. After knocking, a card is discarded, chosen to minimise deadwood. If a player has no deadwood (all their cards are included in melds), they have gin. If a player knocks with gin, they are the winner. If they knock without gin, they only win if their deadwood is lower than (not equal to) that of their opponent.

If a player knocks without gin, the other player may add cards from their deadwood into melds created by the player who knocked, thus reducing the deadwood score of the player who did not knock. This is called laying off.

At the end of each hand only the winner scores points. Points are awarded as follows, and are summed:

Knock bonus: The winner receives points amounting to the difference between their deadwood and that of the other player (zero if both players have the same deadwood score).

Gin bonus: If the person who knocks has gin, they receive 25 points.

Big gin bonus: If the person who knocks has big gin (all 11 cards used in melds), they receive 50 points.

Undercut bonus: If the winner is not the person who knocked, they receive 25 points.

The traditional scoring differs from the simple method in the following ways:

Box score: The line bonus is not awarded every hand, instead the players are awarded a box score of 25 points for each hand won during the game after the game is over.

Game bonus: A game bonus is awarded to the winning player of 100 points at the end of the game.

The winner of the game is still the player to first reach the win target, even if the opponent final score is greater.

In the Oklahoma Gin variant, the first upcard determines the maximum number of points with which a player may knock in that deal. Face cards count as 10, aces as 1, and number cards as their index value. For example, if the upcard was a 5, the knocker must have five points or less. Optionally there is a setting for the rule that if the upcard is an ace, a player may only go out with a gin hand. In addition, the "Spades Double" setting may be used, in which case a spade as the upcard causes all points in that hand to count double.

Choose from the following settings (defaults shown in italics):

Ace Must Be Gin: false or true. In Oklahoma game mode, this flag sets whether, in the event of the first upcard in the round being an ace, the maximum deadwood score target before a player can knock is 0 or 1.

Spades Double Bonus: false or true. In Oklahoma game mode, this sets the score for the round (apart from line bonus) to be doubled if the first upcard of the round is a spade.

From the home screen you can access the following options:

Your cards are displayed face up at the bottom of the screen and your opponent’s cards are face down at the top. Your cards are ordered low to high from left to right. If you have more than one of the same kind of card, the suit order is diamonds, spades, hearts, clubs from left to right. Your opponent’s cards are ordered at random. Melded cards are moved to the right and placed slightly below deadwood cards. If cards can be melded in more than one way, that which minimises deadwood is chosen.

During play, each player’s score for the game is shown on the right and your deadwood score is shown above your hand. A green light is displayed next to the score of the player whose turn it is to act. Pass, Knock and Gin buttons are shown at appropriate points in the game when it is your turn to act.

When it is your turn to act, tap either the card face up next to the deck, the card face down on the deck, or the Pass button (first card only) as appropriate. To discard a card, tap that card in your hand and it will rise above the rest. This selection can be confirmed by tapping that card again, or changed by tapping a different card. If any tapped card bounces, it is because you are attempting an invalid move.

When a player knocks, both hands are displayed face up with melds on the left and deadwood cards on the right. If any laying off is possible, these cards are moved to the opponent’s melds. The game scores on the right are temporarily replaced with deadwood scores. After a short time the scoreboard is displayed with the winner’s scores, and then the total scores for the game. From here you can choose Continue or Home (this ends the current hand). When a player reaches or exceeds the win target (see Settings) a trophy is displayed next to their score and the game ends. From here you can choose New game or Home to return to the home screen.